It sounds ridiculous to have to say it. Of course Egypt didn't want this. No one wants death and violence in the streets. But it does seem that a majority of Egyptians support the military coup that recently removed their first democratically-elected president, when hardly one year ago a majority of Egyptians supported the election of that same president. Or did they? I'm not suggesting nefariousness, I'm not suggesting ballot-stuffing, election fraud, vote buying; nothing like that. No, Morsi won the election completely within the rules. But despite that fact, a majority of Egyptians did not, in fact, support him. The problem was, the rules were incredibly stupid. Un-democratically stupid. Self-defeatingly stupid. And we could shrug and say "I guess that was dumb of Egypt," except that we use the same rules in much of the United States.

The rules for Egypt's 2012 presidential election (and for most seats of the preceding parliamentary election) were simple: plurality, and if no candidate receives a majority, the top-two candidates head to a runoff. Now, there were five candidates who received more than 2% of the vote in the first round of the election. And it is entirely possible—and I would say it's probably—that the first- and second-place candidates were the two least liked candidates of that group, by which I mean, either one would have lost in a runoff election against any of the other three. In other words, in 2012, Egyptians elected their second-least-preferred choice to be their president. In such a revolutionary time, with years of political oppression finally released, and with several vastly different ideas of where to take the country politically, is it even a surprise that such a candidate would be removed less than a year later?

I've constructed a simple example using Yee's Voteline simulator that roughly parallels the results in Egypt. Beginning with Morsi (a Muslim Brotherhood leader and the election winner) on the left, then Abou al-Fotouh (a former leader in the Muslim Brotherhood), followed by Sabahi (a secularist and opponent of the Mubarak regime), Moussa (one time Minister of Foreign Affairs under Mubarak, but also something of a rival of his), and finally Shafik (named Prime Minister by Mubarak on the eve of his expulsion.) 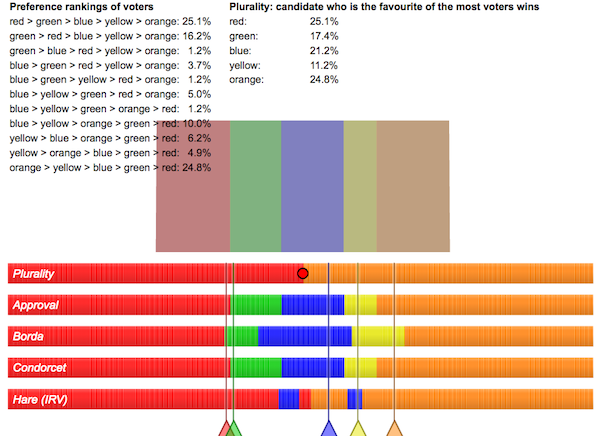 When the middle three candidates are removed, the result mirrors the outcome of the runoff election. It's a very approximate recreation, and I'm not entirely comfortable with Sabahi and Moussa's positions in particular, but there's a rough line from most-recent leader of the Muslim Brotherhood to most-recent member of the Mubarak government, with Sabahi (having not ever been a member of either) in the middle. Now, I'm no expert on Egyptian politics, and a one-dimensional simulation like this must necessarily leave out some details, but I believe my result to be at least illustrative if not entirely accurate. You're more than welcome to play around with Yee's simulator yourself to see if you can find something better.

I found it interesting, while I was reading up on the candidates, that most Egyptians voted for a secularist candidate (Sabahi, Moussa, or Shafik) and also most Egyptians voted for a candidate unaffiliated with Mubarak's government (Sabahi, Abou al-Fotouh, or Morsi) but the runoff election pitted the most-religious candidate against the candidate closest to Mubarak. In other words, the 3rd-5th place candidates split the middle of the electorate, dooming the runoff to extremism. You can also see that most other election methods, including approval voting, Borda count, and any Condorcet method, would all have elected Sabahi (however, this is where I lose some faith in the model, as I think Moussa may have proved to be the true winner under some of those methods, but it would take a multi-dimensional model to see it. A Sabahi/Moussa runoff would have been a good election.) Interestingly, instant runoff voting ends in the same Morsi/Shafik showdown as plurality plus runoff, and ends the same way, further condemning that method.

The moral of the story is: Winning an election, if that election has stupid rules, doesn't necessarily get you the best result. In a developed democracy, we can roll with it, wait four years, and try again. In a high-stakes post-revolutionary environment, getting it wrong this way leads to violence, death, and an irrevocable (if unfair) stain on democracy itself. But democracy didn't fail in Egypt. Democracy didn't kill 600 Egyptians last week. Plurality voting did.

Email ThisBlogThis!Share to TwitterShare to FacebookShare to Pinterest
Labels: egypt