The other day, I noticed that the number-one referrer to this site recently has been Rise of the Center. So, first of all, thanks to them and everyone who's found their way here through them. Second, I have an important observation to share with you: instant runoff voting is a uniquely poor voting reform option for centrist. I was reminded of this fact while playing with Ka-Ping Yee's Voteline simulator, in order to respond to points made in the comments of my previous post on the Independence of Irrelevant Alternatives. And while it's something I've alluded too before, I don't think I've ever stated it this bluntly.

The Voteline simulator uses a very simple model. Voters are smoothly distributed along a left-to-right spectrum. Candidates occupy one point on that spectrum. Voter preferences are based on the linear distance from themselves to the candidates; closer candidates are preferred. The meanings of the colors may not be obvious though. The represent who the winner of the vote would be if the entire electorate were shifted, together, so that the median voter was at that point on the line. The relative distances between the candidates don't change, nor does the distribution of voters.

If you believe the winner of an election should be the candidate closest to the center of the political distribution, you would want an election method that always has a nice broad swath of matching color around each candidates' place in line, and 3 of the 5 methods used in Voteline do precisely that. The two that don't are plurality and "Hare (IRV)", AKA instant runoff voting. Instead, a candidate's place in line can easily be taken up with other colors, meaning that even if they are the most-centrist candidate, a different candidate would win the election. 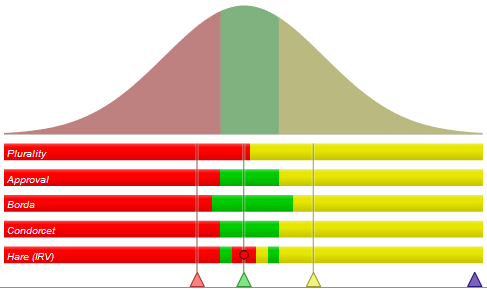 It's not even that hard to squeeze a centrist candidate completely out of the running. 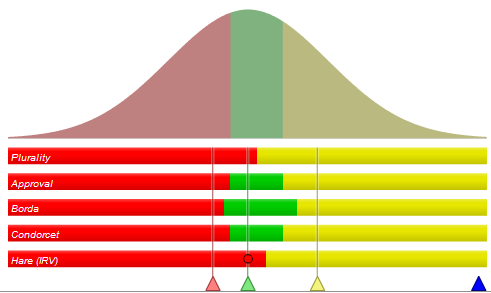 I've talked before about why we use models in these arguments. All models have their shortcomings though, and the one used here certainly contains some exaggerations; not all voters fall neatly on a single axis for instance (but see Yee's two-axis simulations) and we only have symmetrical voter distributions to play with here and so on. And there are other models in which IRV doesn't look quite as bad. But those models don't have any way of defining a center, so if you're buying into the idea of centrism, you don't have many other places to turn to for data.