Just a quickie (I know, I haven't posted that Egypt piece I promised; turns out, just because you don't know a lot about a foreign country's politics, doesn't mean they're simple) and not something that's new if you've been following us closely, but Ka-Ping Yee has a nice, simple, short paper based on his previous work, titled "Disadvantages of Transferable Vote Systems". This one is restricted to just plurality, IRV, and approval, and comes out strongly for approval. Also, the pictures look pretty sweet, so check it out.

I'm writing a longer piece on this same topic, but I want to get something out while it's still in the news.

LoAE Mascot: The Least of All Weasels

Too much serious business last month, so it's time for some relaxation. I've been lying in wait with this post for a few weeks now, waiting for the perfect time to pounce. You see, all the world's great organizations—sports teams, political parties, even nations—have something in common, and that's mascots. So after careful consideration of several possibili... oh, who am I kidding? It's a silly pun, plus look at how cute this little guy is!

This is Mustela nivalis, or the least weasel. Found in North America from the U.S. eastern seaboard to Alaska (much like myself) as well as across northern Asia, all of Europe, and even into northwestern Africa, the least weasel is astoundingly prolific, but rarely noted, possibly because of it's small stature (weighing just 1 to 9 ounces (30-250 grams.)) Which is a mistake, since this tiny carnivore can take down prey five times its own size, and more! Legends even say that the weasel is the only creature capable of defeating the basilisk. Basically, they're fuzzy little magical four-footed ninjas, and who doesn't love ninjas?

I know who has my vote for next King of the Animals. 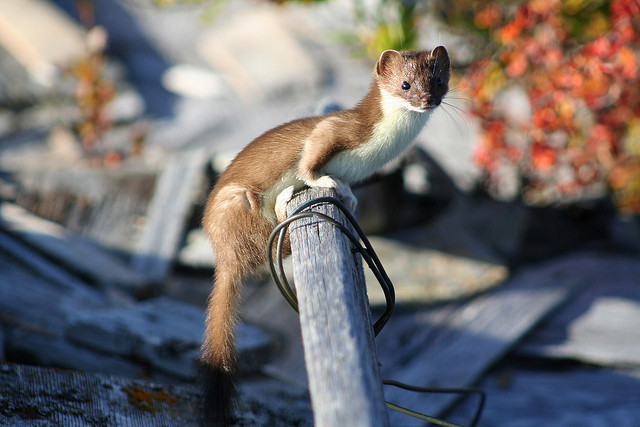