Cross-posted to my lovely wife's Web Librarian blog. The American Library Association is currently having a discussion about how they elect their Council, and she figured "Hey, I know a guy who loves to talk about election stuff!" This is a good back-to-basics introduction to our topic:

It has been said that democracy is the worst form of government, except all the others that have been tried. And the essential component for democracy is voting. So it seems reasonable that a better way of voting would lead to better democracy. That’s the motivation behind the Center for Election Science, the book Gaming the Vote: Why Elections Aren’t Fair (and What We Can Do About It), and this post.

Let’s break voting down. You have 1) a group of mutually-exclusive options to choose from. We don’t have to be talking about candidates for office; we could be deciding between different pizza toppings, or names for your new band. You have 2) a group of people with opinions about those options. Finally, you have 3) a system which takes those opinions and uses them to select one of the options. Actually, you have a whole lot of different systems, and you get to choose one. Your system could be “pick one of the options at random.” That’s not a good system, since you could end up with an option that everyone hates. Or, you could pick one of the people at random, and let them choose. That’s a little better—you know you’ve picked an option that at least one person thinks is the best—but what if everyone else thinks they’re wrong? Shouldn’t we consider everyone’s opinions?

Okay, so what if we let each person name their favorite option? And then, whichever option the most people choose, that’s the one we go with. This is the system you’re probably most familiar with. It’s called “plurality” or sometimes “first past the post.” And since you’re familiar with it, you’re probably also familiar with some of its shortcomings. For example, sometimes you might really like one of the options, but you also know that there are two other options where almost everyone else thinks one of them is the best. If you also have a strong opinion between those two, you need to decide if you’re actually going to support your real, no-hope favorite, at the risk of getting something popular that you don’t like. Or perhaps, there are two options which both seem equally good to you, and another popular one that you think is terrible. It can be difficult to determine which of the two good ones to get behind, and if people split evenly between them, it’s quite likely both will lose. You shouldn’t have to distort your opinions in order to vote effectively. Instead, you could use a voting system which collects more information about the voters’ opinions on the options, and incorporates as much of that as possible into the process.

It turns out, there are many other systems to choose from that are better than plurality. Some of them ask you to rank the options in order from your favorite on down. However, every single one of those methods suffers from at least one of the same shortcomings we identified for plurality: either there will be situations where you have a compelling reason not to vote for your real favorite first, or multiple too-similar options will stomp on each others’ support. Or both! This problem is a consequence of a very famous (and Nobel-prize-winning) theory from economics called Arrow’s Impossibility Theorem. Arrow’s theorem is usually pithily summed up as “There is no perfect voting system.” The whole truth is, of course, much more complicated than that. And while actual perfection probably is impossible, there has recently been a push in favor of voting systems which achieve what Arrow proved to be unachievable. Arrow wasn’t wrong; rather, his proof simply—and intentionally—ignored another class of voting systems, a class that doesn’t ask voters to rank the options, but rather, asks them to rate them. 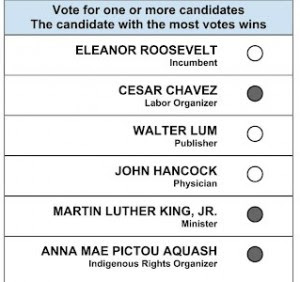 Think of it like giving “stars” to products on Amazon, or “liking” comments on social media. You don’t consider each product by directly comparing it against all other products you’ve ever purchased, or each comment by directly comparing it against every other comment you’ve read today. Instead, the process is more indirect. This book was about a 4. That banana slicer was definitely a 1. You like your aunt’s comment enough to say so, or you don’t. What are the best products? Probably the ones with the highest scores. What are the best comments? Probably the ones where more of the people who saw it, liked it.

Approval voting is the simplest of this class of voting methods. It’s exactly like “liking.” For each option, each voter can either approve of it, or not. The option with the most approvals wins. You can expand on the idea by using an idea like “stars.” Each voter gives each option as many points as they like, up to some limit, often 5 or 9 or 99. This method is called score voting. (And you can think of approval voting as score voting with a limit of 1.) Because you rate each option completely independently, similar options don’t ruin each others’ chances, and you can always give top mark to the choice that’s your true favorite. By fixing the problems that encouraged people to distort their opinions, by collecting more information from people about their opinions, and by incorporating it into the process in an intelligent way, a group is better-able to select the option that is the best choice for it. Approval voting is better democracy.

Further reading: What Do You Mean By "Best"?